The Power of AweRobert Brooks, Ph.D. 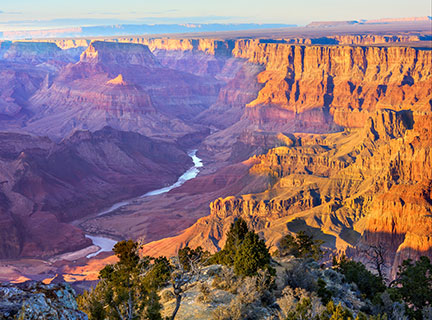 This past October while reading the Sunday Boston Globe, I was intrigued by the cover of Parade magazine.   The word “AWE” was printed in large letters above a view of the earth taken from outer space.  The following description appeared under the photo: “How the soul-stirring wonder sparked by a shooting star or a majestic peak can transform your health and happiness.”

Many of my writings focus on strategies to enhance our emotional and physical well-being as well as our sense of happiness.  Thus, the words “can transform your health and happiness” caught my attention.  The article, authored by Paula Spencer Scott, began by describing the experience of Stacy Bare, a man who was reported to be suffering from PTSD, burdened by suicidal thoughts, and drinking heavily after a second deployment in Iraq.

Bare and his brother were arguing while hiking when they suddenly viewed the Druid Arch in Utah’s Canyonlands National Park.  “The men’s jaws dropped.  They laughed.  They hugged.  What were they ever arguing about? Bare recalls thinking.”

Scott explained, “They’d been awestruck—altered in an instant by an electrifying emotion that scientists have only begun to study.”

I was unaware of the emerging body of research examining the experience and impact of awe, so I decided to read other articles related to the topic.  Several cited a seminal piece authored in 2003 by psychologists Dacher Keltner at the University of California at Berkeley and Jonathan Haidt at New York University.  In 2013 Keltner’s lab initiated Project Awe, a three-year research project funded by the John Templeton Foundation that has been a catalyst for research about awe.

The Experience of Awe

In an essay that appeared in Greater Good, Keltner defined awe as “the feeling of being in the presence of something vast that transcends your understanding of the world.  Early in human history, awe was reserved for feelings toward divine beings, like the spirits that Greek families believed were guarding their fates.”

However, Keltner noted, “More frequently, though, people report feeling awe in response to more mundane things: when seeing the leaves of a Gingko tree change from green to yellow, in beholding the night sky when camping near a river, in seeing a stranger give their food to a homeless person, in seeing their child laugh just like their brother.”

Jordan Rosenfeld in an article published in NYMag.com stated, “Think of the first time you’ve experienced awe.  Maybe you were gazing up at a massive mountain range, or looking down into the depths of an infant’s eyes, or watching lightning as it seemed to crack the sky open.  Maybe you felt humbled, or shaken; maybe you were struck by the vastness of the universe and your tiny part in it.”

I was flooded with memories as I read these descriptions of events that triggered awe.  I recalled the first time I held my older child Rich, looking closely at his face and thinking, “Oh my, this is my son!”; being in the delivery room for the birth of my younger son Doug (fathers were not yet allowed in the delivery room when Rich was born); the first time I viewed the Grand Canyon (no photos could truly capture how majestic it is); being in the Rocky Mountains one evening shortly after we moved to Denver and looking up at the sky—without the distracting lights of a city—and noticing that the number of stars and their brilliance seemed a hundredfold more than what I had ever seen before; and watching the broadcast of Neil Armstrong taking man’s first steps on the moon.

Rosenfeld referenced the work of Keltner and Haidt, noting that the experience of awe “appeared to increase people’s feeling of connectedness and willingness to help others.”  Keltner and Haidt expressed the view, “Awe-inducing events may be one of the fastest and most powerful methods of personal change and growth.”  Keltner added in his Greater Good essay, “Awe binds us to social collectives and enables us to act in more collaborative ways that enable strong groups, thus improving our odds for survival.”

Keltner and his colleagues conducted some fascinating experiments to highlight the benefits of awe.  As one example, they requested one group of participants to gaze at North America’s tallest eucalyptus trees while another group looked up at a tall science building.  Not unexpectedly, those glancing at the tree reported a greater feeling of awe than those looking at the building.  A situation was then arranged in which participants from both groups encountered a person who stumbled and dropped a handful of pens on the ground.  Those who had looked at the trees were more apt to help the person pick up the pens than those who had gazed at the science building.

Keltner and Paul Piff, a psychologist at the University of California at Irvine, reported in a New York Times piece another study focusing on awe.  Feelings of awe were elicited either by requesting people to recall and write about a previous experience of awe or having them watch a brief video of “sublime scenes of nature.”  The research found that “participants experiencing awe, more so than those experiencing emotions like pride or amusement, cooperated more, shared more resources and sacrificed more for others—all of which are behaviors necessary for the collective life.”

The question may be raised, “Why and/or how does an experience of awe contribute to altruism of different kinds?”  Piff and Keltner offer a thought-provoking explanation.  “One answer is that awe imbues people with a different sense of themselves, one that is smaller, more humble and part of something larger.  Our research finds that even brief experiences of awe, such as being amid beautiful tall trees, lead people to feel less narcissistic and entitled and more attuned to the common humanity people share with one another.”

They continue, “In the great balancing act of our social lives, between the gratification of self-interest and a concern for others, fleeting experiences of awe redefine the self in terms of the collective, and orient our actions towards the needs of those around us.”

Other Benefits of Awe

In other studies, awe was found to help people to be more creative, to be able to shift their perspective in order to entertain novel solutions to problems.  In this regard, Scott quoted Albert Einstein in her Parade article, emphasizing his observation that feelings of awe are “the source of all true art and science.”

Still other research has linked the experience of awe to better health.  Scott described the work of Jennifer Stellar, a psychologist at the University of Toronto.  Stellar explained that awe represents the positive emotion that “most strongly predicts reduced levels of cytokines, a marker of inflammation that’s linked to depression.”  Stellar believes that such a finding may help to explain a number of recent studies that have “linked exposure to nature with lower blood pressure, stronger immune systems and more.”

In reflecting upon these studies, I recalled an eight-year-old boy I saw in therapy who was burdened by anxiety and depression.  He described an experience that might best be interpreted as awe.  He told me how a pet dog that the family recently purchased cuddled against him and licked his face and how good it made him feel.  His parents reported how “amazed” he was that this new pet so quickly showed affection towards him and how much more relaxed he became after the presence of the dog.

Bare, the veteran suffering from PTSD whom I mentioned at the beginning of this article, is now director of Sierra Clubs Outdoors, the arm of the environmental organization that sponsors trips for groups.  They have taken veterans and at-risk youth on these wilderness excursions and found “measured improvements in psychological well-being, social functioning, and life outlook.”

In light of the evidence of the positive impact of awe on our emotional and physical well-being as well as our relationships and altruism towards others, I believe we must consider ways in which to incorporate experiences of awe into our daily lives and the lives of our children.  The inclusion of awe-enhancing experiences is even more imperative given the conclusion reached by Piff and Keltner that “you can make the case that our culture today is awe-deprived.”  They observe that adults are spending more and more hours working and commuting and less time outdoors and with other people.  They also assert that attendance at live theater, music shows, and museums has decreased.  And we all know how distracted we have become with smart phones and other technology that are now a dominant force in our lives.

Piff and Keltner also take aim at the diminution of experiences of awe for children.  “Arts and music programs in schools are being dismantled in lieu of programs better suited to standardized testing; time outdoors and for novel, unbounded exploration are sacrificed for resume-building activities.”

Discovering Awe in Our Daily Lives

In her Parade article, Scott listed several recommendations for discovering awe in our everyday lives, including: “drop the devices and gaze at the cloud and stars; visit a local state or national park; take an Awe Walk in your neighborhood, noticing things as if for the first time; get up early to watch the sunrise; play amazing music.”

All realistic, practical suggestions.  I would like to add several others, especially in terms of our children.

Spend undivided time with a child (which implies shutting off smart phones and other devices) and, if possible, observe the joy of a child playing in a sandbox or climbing up a slide at a park.  For some children, the delight they display as they reach the top of the slide is as if they have conquered Mt. Everest.  Let us join in this delight.

Engage in simple physical activities with children, whether going for a walk or a bike ride, or tossing a ball, or baking cookies (children can be in awe of the foods they  create—and then eat).

With all of the divisiveness in our world, become involved in charitable activities with other adults and children.  Watch the look on the face of children as they deliver food for the elderly or help serve meals at a homeless shelter.  To observe their participation in such activities is often as powerful, if not more powerful, than even gazing at nature’s beauty.

The photo of the earth from space on the cover of the Parade magazine in which the topic of awe is featured is indeed striking.  However, while such an image is very powerful, we must not lose sight of an important insight provided by Keltner, Haidt, Piff, and their colleagues, namely, sometimes the seemingly more mundane experiences produce profound emotions associated with awe.

Awe is certainly a topic deserving of further definition, research, and application.