“Why Do You Put Yourself Down?” Part IIRobert Brooks, Ph.D. 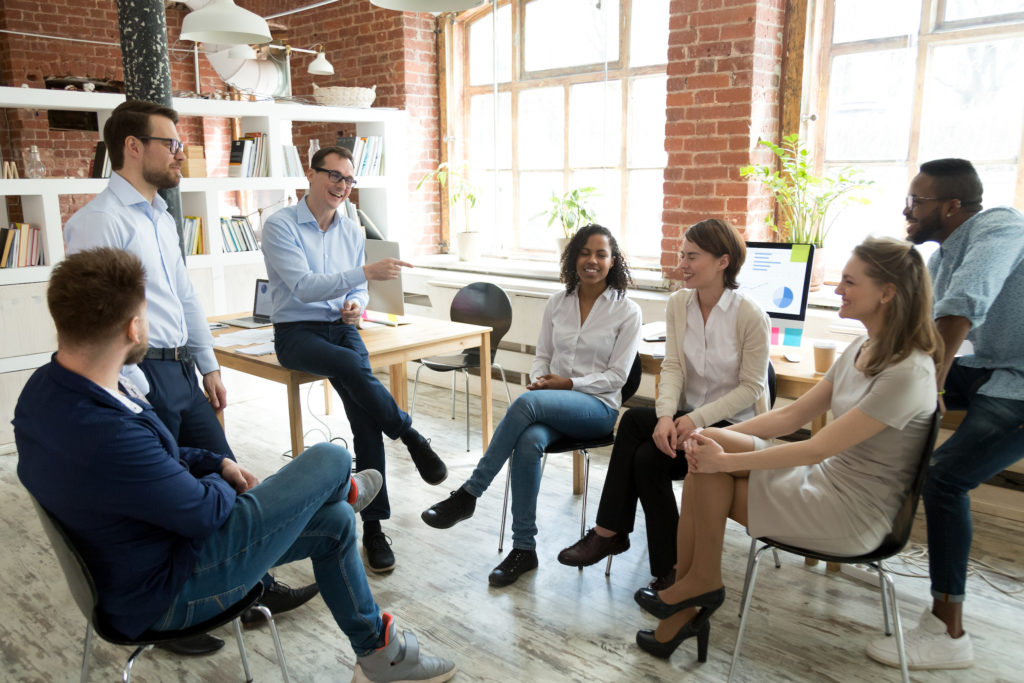 In my January column, I examined the benefits that arise when business leaders and others in supervisory positions reveal to their staff and colleagues failures they have experienced during their professional journeys.

The catalyst for my writing the column was an article “Why Managers Should Reveal Their Failures” authored by Dina Gerdeman and posted by Harvard Business School.  The piece was based on a lengthier paper “Mitigating Malicious Envy: Why Successful People Should Reveal Their Failures,” authored by Alison Wood Brooks (as I noted last month, I am not related to Alison) with Harvard Business School colleagues and graduate students Nicole Abi-Esber, Ryan Buell, Brian Hall, Karen Huang, and Laura Huang.

Upon reading Brooks’ research I recalled an interaction I had several years earlier.  An individual approached me at the end of one of my workshops and asked, “I’m curious, Dr. Brooks.  Why do you put yourself down?”  He zeroed in on my describing the insecurities I experienced as a therapist, especially at the beginning of my career, and my asserting that I probably wasn’t as effective with my initial patients as I was with patients I saw as a more seasoned clinician.

I had two main objectives for sharing with audiences my early doubts as a therapist.  The first was to acknowledge what I perceived to be obvious, that as we begin our careers it is not unusual to experience insecurities and setbacks that can then serve to contribute to our growth regardless of our occupation—we learn from rather than feel defeated by our mistakes.  No one is born an expert.  We all require hours of practice and supervision/mentoring to reach higher levels of performance and achievement.

The second objective was rooted in my belief that it is much easier for students, staff, colleagues, or audiences to learn from us if they feel connected to us, if they recognize that we have also experienced doubts, insecurities, and failures similar to their own.  I believe that such a recognition nurtures a sense of empathy and closeness, lessens defensiveness, and creates an atmosphere in which learning can thrive.

Questions that I Posed

At the conclusion of last month’s article I asked readers to consider several questions prior to reading this month’s column.  They were:

Did you ever listen to or interact with individuals who came across as rarely, if ever, making a mistake?  Instead, they spoke only about their achievements.  What words would you use to describe such individuals?

In contrast, can you recall listening to or interacting with individuals who were comfortable speaking about their doubts and mistakes as well as what they learned from their setbacks?  What words would you use to describe these individuals?

I was not expecting anyone to write to me with answers to these questions, but I was impressed that several people took the time to do so.  In addition, a few shared their answers with me while attending presentations I gave.

A common response, which I did not find surprising, was that it was difficult to learn from someone who never acknowledged mistakes in contrast to a leader who as one man described, “comfortably discussed his feelings of vulnerability and his struggles with mistakes.”  Words used to describe the former varied, including arrogant, insecure, power hungry, a true denier, while the latter was seen as secure, comfortable in their own skin, empathic, comforting.

One woman in the field of mental health reported, “I had a supervisor who came across as always knowing the answer.  He was arrogant.  I don’t think he even realized that his style increased my insecurities and made me doubt if I would ever feel competent as a therapist.  I accept that part of it was my issue, but I always felt so anxious in our supervision sessions.  Fortunately, I had other supervisors who were more open in discussing their setbacks as therapists and were reassuring in letting me know that it took time for them to feel more confident.”

Other Questions to Consider about Revealing Failure

I posed other questions in the January article that I said I would address in this month’s column.  These questions and my answers follow:

When and how to share stories of setbacks so that others can learn from our experiences whether in our role as a business leader or manager, parent, coach, or teacher?

I believe acknowledging current or past failures can transpire within a wide spectrum of circumstances, some spontaneous, some planned.  For example, the more spontaneous moments may emerge during a supervision or mentoring session, especially when the person being supervised expresses doubts about his or her professional progress or competencies.  As I know from personal experience, when I was in training, learning that my supervisors had experienced similar insecurities and setbacks was reassuring.

Scheduled meetings or presentations with one’s staff can also provide a platform for acknowledging both recent and/or past mistakes.  In an article “The Value of Acknowledging Your Mistakes” posted on-line for The Public Manager, Chris McCloskey cited a study conducted by Dale Carnegie Training of nearly 3,100 employees from 13 countries.  McCloskey wrote, “Eighty-one percent of respondents said that having a leader who will admit to being wrong is important or very important to inspiring them to give their best efforts at work.”  Sadly, “only 41 percent said their supervisors could be trusted to do so consistently.”

The latter finding raises questions about how best to garner trust.  McCloskey observed, “Typically, when leaders realize they’ve made a mistake others have noticed too.  Leaders who then fail to admit they were wrong leave employees feeling as though their leaders consider being right more important than being honest.  Taking responsibility demonstrates that leaders value integrity over the easier paths of laying blame or hoping their mistake won’t be exposed.”

Acknowledging and/or revealing mistakes and failures is only part of the picture.  Successful leaders, teachers, coaches, or others in similar supervisory positions must also communicate what they learned from their mistakes.  Executive coach Lolly Daskal in an article “4 Impressive Ways Great Leaders Handle Their Mistakes” that was posted on Inc.com offered this perspective of setbacks: “Mistakes are among the greatest teachers, and working to understand your mistakes is one of the best forms of self-education.  Creativity is allowing yourself to make mistakes; leadership is learning from them.”

Daskal emphasized the importance of conveying to others what lessons you learned from your mistakes.  “When you make mistakes, make a point of teaching others what you’ve learned.  Doing so builds connection and trust.  The best leaders are the great teachers, coaches, and guides who show us the way after they have been down that path.”

A recurring theme that emerged from the articles I reviewed is that when leaders   acknowledge and communicate mistakes, they nurture positive relationships and trust.  These actions are not interpreted as a weakness but rather as a strength, especially if they describe the steps they initiated to surmount obstacles.

How does empathy play a role in determining the situations in which we share such stories and the ways in which we do so?

As anyone familiar with my work is aware, I believe that empathy serves as a basic foundation in determining the quality of our interpersonal relationships.  The presence of empathy enriches our interactions with others.  Psychologist Daniel Goleman asserted that empathy is an essential component in both emotional and social intelligence.  To facilitate a positive outcome when acknowledging and revealing mistakes, it is wise that to consider such questions as:

What is the purpose of my telling this story about my life at this time to this person (or group of people)?

Are they likely to experience my disclosure in the way I intended?

If not, do I not tell the story or do I change the way in which I convey my personal experiences?

What words do I hope others use to describe me as I tell my story?

Hopefully, reflecting on these questions will encourage leaders to be more empathic and more aware of the importance of placing themselves in the shoes of others and seeing the world through their eyes.  As Daskal noted, this process builds connections and trust.

Can asking job applicants to describe situations in which they encountered doubts or mistakes and how they dealt with these experiences serve as a useful source of information in the interview process?

I included this question based on my experience interviewing numerous applicants for psychology staff or trainee positions at McLean Hospital, the psychiatric hospital at which I worked for 23 years.  I typically asked applicants to describe a clinical situation they encountered that they would handle differently today.  In posing this question I was well aware that most if not all individuals being interviewed for staff or trainee positions experience some level of anxiety; I was also aware that some applicants, especially those applying for internships, had limited clinical experience upon which to draw.

I attempted to lessen this understandable anxiety by mentioning that I had kept notes for every therapy session I conducted from my first patient to the present day.  I said that I found it educational to read these notes years later and reflect upon what I would do differently today.

I discovered that engaging in a dialogue that focused on the question of mistakes elicited a rich source of information.  As I listened to the responses offered by applicants, as I posed questions about their understanding of the clinical situation and what they might do differently now, it provided me a sense of how each applicant might respond to supervision and mentoring and how open he or she was to reviewing their clinical interventions.

I might add that this information often served as a better indicator of the strengths and vulnerabilities of applicants and their future “fit” with our program than the graduate school in which they were enrolled or from which they graduated or their grade point average.

In her article, McCloskey quoted Dale Carnegie who advised, “When you’re wrong, admit it quickly and emphatically.”  Sound advice.  I would also emphasize two other points.  One, follow an acknowledgement of your mistakes with a description of steps you plan to implement to remedy the situation.  Two, even years later describe what you learned from that event as you interact with individuals you are leading, supervising, or mentoring.  In recounting your story, others will be the beneficiaries of your honesty, openness, and knowledge.  Hopefully, you will have given them a gift that they will then bestow on others.