Facing Our Mortality: To Lead a Meaningful LifeRobert Brooks, Ph.D.

One of the most thought-provoking books I have read during the past few years is Being Mortal by Dr. Atul Gawande, a surgeon on the faculty of Harvard Medical School. His observations as a physician as well as his personal experiences as his father was dying of cancer should serve to encourage all of us to reflect upon our own mortality. Gawande, in recalling his training, writes:

I learned a lot of things at medical school, but mortality wasn’t one of them. Although I was given a dry, leathery corpse to dissect in my first term, that was solely a way to learn about human anatomy. Our textbooks had almost nothing on aging or frailty or dying. How the process unfolds, how people experience the end of their lives, and how it affects those around them seemed beyond the point. The way we saw it, and the way our professors saw it, the purpose of medical schooling was to teach how to save lives, not how to tend to their demise.

Reading Being Mortal aroused many thoughts and emotions in me, housed in both personal and professionals experiences—the sudden loss of my brother Irwin at a young age to a terrorist act, the death of my twin brother Michael four years ago to a rare disease, and my clinical interactions with patients of all ages in which issues of death and dying were prominent themes. In addition, I thought of workshops I provided for parents and other caregivers related to helping children deal with loss; those attending frequently wondered how they might answer the following questions posed by their children: 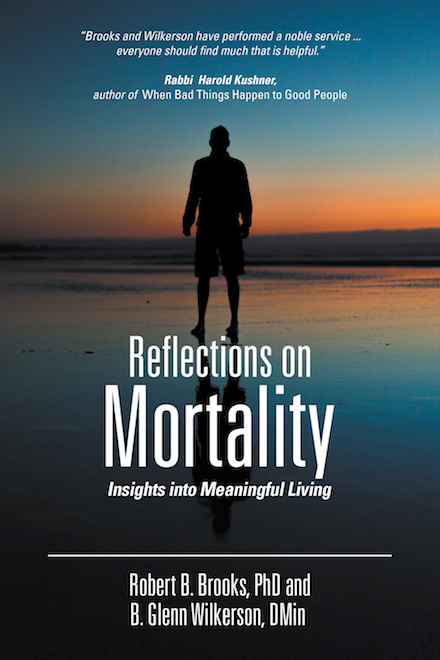 “What happens to people when they die?”

“Where is heaven? Can you see it?”

“What do people do in heaven?”

“Is there really a heaven and a hell?”

“Why did my daddy (or mommy) have to die? It’s not fair. Who will take care of me if you die also?”

“I thought only old people died. Why did my sister die?”

There is no simple answer to these questions for a number of obvious reasons. One factor is that numerous studies have revealed that the finality of death is not an easy concept for young children to grasp. For instance, a four-year- old uttered, “My grandma died, but she’s coming to my birthday party.”

Our Own Struggles with Mortality

Difficulty answering our children’s questions about death is often a reflection of our own struggles dealing with the topic. Many adults avoid even using the terms “death” or “dying,” instead preferring words that serve as euphemisms such as “passing away” or “departing.” At one of my talks, a woman in the audience revealed, “I don’t know why, but I feel uncomfortable saying words like ‘death’ or ‘dying,’ not only when speaking with my children, but with anyone. It may sound silly, but it’s much easier for me to say someone ‘passed away.’”

Related to this woman’s comments are the thoughts, emotions, questions, an uneasiness that most of us face when the theme of our own mortality comes to the forefront, including:

“Do I believe in an afterlife and, if so, what is it?”

“If I believe in an afterlife, do I also believe that my behaviors in this life determine what my afterlife will be?”

“If I do not believe in an afterlife, how does that impact on my behaviors in this life?”

“What emotions arise as I consider my own mortality?”

“Do I use denial and push thoughts about mortality to the background?”

“Does consideration of my own mortality, whether I believe in an afterlife or not, prompt me to lead meaningful life or does it increase my anxiety and pessimism?”

“If I died tomorrow, what regrets would I have about things I should or shouldn’t have done?”

“What steps might I take to address these regrets while I am still alive?”

“If I became seriously ill, would I want extraordinary measures taken to extend my life?”

Conversations about and answers to these questions are complex. Our answers are rooted in great part in our religious or non-religious beliefs, which, as we all know, vary significantly from one person to the next and determine our outlook towards our own death. Returning to the insights conveyed by Gawande, “When I came to experience surgical training and practice, I encountered patients forced to confront the realities of decline and mortality, and it did not take long to realize how unready I was to help them.”

Fortunately, Gawande’s concerns about his training in the area of mortality are now being addressed. An article by Felice Freyer published several years ago on the website of the Boston Globe reported that new Medicare rules will require health care providers to initiate and discuss end-of- life care with patients well before such issues are imminent. Freyer’s piece emphasized the recognition in the medical profession that physicians must be better equipped to discuss these issues, noting that “at least 136 medical schools include end-of- life care in a required course and 94 in elective courses.”

As I considered the questions raised by children about death and dying as well as the emotions and thoughts elicited in adults about their own mortality, I remembered a quote I first read as an undergraduate in a child development course, one that has always stayed with me. It appeared in psychoanalyst Erik Erikson’s classic book Childhood and Society. Erikson proposed, “Healthy children will not fear life if their parents have integrity enough not to fear death.”

A Book about Mortality

During the past several years I have engaged in more thinking about how to answer our children’s and our own questions about death and mortality and the implication that these questions hold for leading a meaningful, resilient life. A catalyst for this increased focus about mortality has been my collaboration with my dear friend Dr. Glenn Wilkerson. Glenn is an ordained minister in Houston and founder and president of the ARKgroup, a nonprofit organization that assists parents and other caregivers to learn effective ways to discipline and raise children. During the past 15 years, he and I have had many conversations about parenting, family relationships, hope, and resilience. However, it was a conversation a few years ago that led us to consider co-editing a book, one that I am pleased to say was just released: Reflections on Mortality: Insights into Meaningful Living. If interested, you can learn about how this book came into existence by going to the following link and reading the Preface from the book http://reflectionsonmortality.com.

In planning this book, we thought it was essential to have clergy and representatives of many different faiths share the ways in which their religious beliefs shape not only their views about mortality but also how they conduct their daily lives. In addition, we wondered how an atheist/humanist perspective impacts on one’s understanding of mortality. And we wanted the book to bring readers the insights of professionals who are directly involved with issues of death such as hospice and funeral directors as well as those in the fields of mental health and health care. We also included the observations of individuals who had faced life-threatening illnesses or events or who had lost a loved one.

Questions about an Afterlife and Heaven

One theme that emerged in a number of the chapters was the question of an afterlife and the existence of heaven. I recall being moved when I read Dr. Eben Alexander’s remarkable book Proof of Heaven: A Neurosurgeon’s Journey into the Afterlife. Alexander details the near-death experience he had when the area of the brain that controls thought and emotion was attacked by a rare disease. He was in a coma for seven days, and his recovery was considered a miracle. Although an essential part of his brain was shut down, showing no activity, Alexander describes a visit he took during this time to what he asserts could best be described as heaven.

Alexander acknowledges that many might dismiss his belief that he was in heaven, but asserts, “I know better . . . I see it as my duty—both as a scientist and hence a seeker of truth, and as a doctor devoted to helping people—to make it known to as many people as I can what I underwent is true, and real, and a stunning experience. Not just to me, but to all of us.”

A consideration of Alexander’s change in belief about heaven in response to his “stunning experience,” as well as the perspectives expressed so eloquently by those who authored chapters for Glenn and my book, prompted me in my chapter to share thoughts about an afterlife and the ways in which these thoughts impacted on what I attempt to do each day in my life.

My view, which I understand may not be fully embraced by all, is that leading a kind, charitable, compassionate life on earth should not be based on the promise of rewards in an afterlife—especially since many people do not believe in an afterlife.

Rather, I wrote that “leading such a life is what contributes meaning and purpose to our existence, whether an afterlife exists or not.”

I added, “My wife Marilyn and I did not teach or model for our sons those behaviors we considered commendable because we thought such actions would help open doors to heaven for them. Our goal was that they would learn and practice values that would enrich their lives and the lives of others in today’s world.”

Continuing this perspective, I ended my chapter with the following thought: “It is my hope that what I do now will live on in the legacy I create for my children, grandchildren, and the many others I have been fortunate to meet during my life.”

In ending, I would like to thank Glenn for his friendship and collaboration, as well as all the contributors to our book, each of whom broadened my perspective about mortality and helped to capture the words we chose as our subtitle, namely, Insights into Meaningful Living.