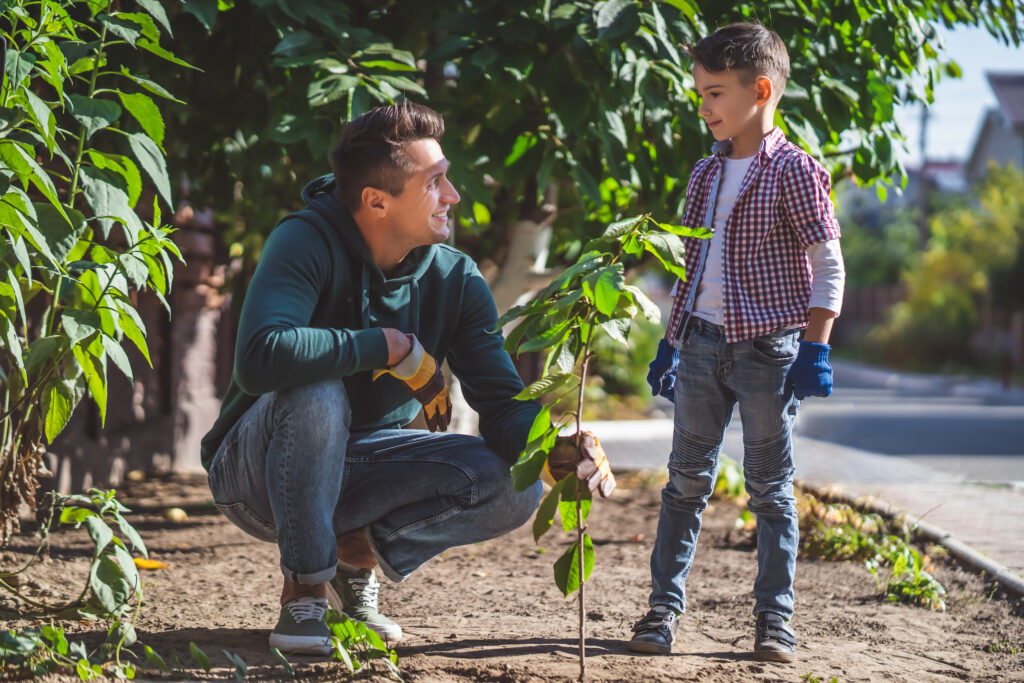 How naive I was.  As I began to engage in clinical work, I soon learned that acceptance of who our children are often represented a formidable task, made even more difficult when children exhibited behaviors that parents viewed as problematic or not in accord with parental values.

Several years later when I became a father myself, first with Rich and then with Doug, I experienced first hand the challenges of acceptance.  An essential ingredient of acceptance is unconditional love, that is, loving our children even when they behave in ways that are questionable or when they follow interests and a path in life that are not necessarily in keeping with our dreams for them.

In understanding what is involved with acceptance, I want to emphasize that it should not be interpreted to mean that we allow our kids to do whatever they want or that we do not discipline them.  Discipline is an important part of parenting, but we must remember that discipline involves teaching, not humiliation or intimidation.

Whether we realize it or not, even when our children are still in the womb, we already have dreams and expectations of what we would like them to be.  As most of us discover, many children do not live up to these dreams and expectations.  This is not an indication that we have failed in our parenting role.  There are many variables, including one’s inborn temperament, that determine our children’s likes and dislikes and their vulnerabilities and strengths.

Research has taught us that given their inborn temperaments some children are predisposed to being more hopeful, optimistic, and socially aware than their peers.  Some will have an easier time learning in school while others will struggle.  Some will be adept at reading, others at art.  The problem arises when the expectations parents have for their children are so fixed and rigid that they cannot adjust to the unique qualities and passions that each child possesses.

The Impact of “Goodness-of-Fit”

In the field of child development there is an important concept that has been labeled “goodness-of-fit.”  It represents the fit between the temperament, expectations, and dreams of parents with who their child is.  It implies that for the parent-child relationship to flourish, it is the parents who must adapt their expectations and behaviors to meet their child’s psychological make-up rather than the child accommodating to the parents’ style.

In the absence of this goodness-of-fit, unconditional love is diminished, overshadowed by anger, frustration, and disappointment.  If children look into the eyes of their parents and all they perceive is disappointment, it will become increasingly difficult for them to feel accepted, and their capacity for hope and resilience will be compromised.  However, if parents can adjust their expectations, if they can honor and accept their children for who they are, a strong foundation for love and happiness is more easily established.

I wish to illustrate this point and the importance of goodness-of-fit by describing my therapy with two families.  One I reported in greater detail in my book Raising Resilient Children, which I co-authored with my colleague Sam Goldstein.  It involves George, a 13-year-old who was shy, had few friends, and was burdened by significant learning problems.  In contrast, his 16-year-old sister Linda was outgoing, had many friends, was an A student, and a star athlete.  The childhood experiences of their parents, Mr. and Mrs. White, paralleled those of Linda.  As children (and now as adults), the parents were very sociable, excellent students, and accomplished athletes.

The Whites were forthright in noting that it was a pleasure to be with Linda but that they were frequently disappointed with George.  Mr. White shared the following belief in parent counseling: “If George wanted to, he could turn his life around.  He’s lazy and always has been.”  George was very aware of his parents’ feelings.  In an individual session, he poignantly and perceptively told me, “My parents love Linda.  I think she makes them feel like good parents.  I sometimes think they wish I was never born.”

Whenever I conduct an evaluation of a child or teenager, I always ask parents, “What is it that your child does well?”  It’s a question that invites parents to begin to focus on a child’s strengths or what I call their “islands of competence.”

I was not prepared for the Whites’ response to my question.  They glanced at each other and Mr. White replied, “We’re somewhat embarrassed to tell you.  We just don’t think it’s the kind of activity that a 13-year-old boy should be spending much of his time doing.”

Mr. White responded, “He likes to garden and take care of plants.  That would be okay if he did well in school and was involved in other activities.  How can a 13-year-old be so interested in plants?”

When I asked George in an individual meeting what he enjoyed doing, he corroborated what his parents had told me.  He described with an obvious sense of joy his love of gardening and growing plants.  He voiced sadness that his parents showed little interest in his favorite activity.  In essence, George’s parents failed to honor the one activity that brought their son a sense of pleasure and accomplishment, which contributed to his sadness and anger.

It is beyond the scope of this article to detail my therapeutic interventions with the White family.  Not surprisingly, a main task, which took time to achieve, was to help the parents develop more realistic expectations for George and to display a more genuine interest in his strengths.  They came to realize the extent to which their love for George (and even for Linda) was conditional.  Basically, their message to George was, “We would love you if you were more like your sister.”  Once the Whites began to convey appreciation for George’s interests and strengths, their relationship with him improved as did his emotional well-being.

The second example is Paul, an 8-year-old, who was referred to me given his high level of anxiety and struggles in school.  His parents Mr. and Mrs. Norwell described Paul as being an anxious child from birth.  With evident emotion Mr. Norwell expressed that when Paul was born he thought of all the fun they would have playing different sports together.  Unfortunately from Mr. Norwell’s perspective, Paul showed little, if any, interest in watching or participating in any sporting events.

Mr. Norwell expressed sadness that what he had anticipated would be a fun and rewarding way of interacting with his son had basically been closed off.  He added that he was struggling with what alternative activities they might do together.  I asked the Norwells what Paul enjoyed doing, and they quickly agreed that he loved to draw and paint and that he showed some talent in this activity.  As they spoke about Paul’s artistic ability, Mr. Norwell noted that drawing and painting were some of his least favorite activities.

In an empathic way I discussed with them the concept of goodness-of-fit and the ways in which it was important for parents to adjust within reason to their child’s interests in order to secure a more positive, loving relationship.

The parents listened closely and both agreed that a top priority was to nurture a very positive, loving relationship with Paul.  Soon after our meeting Mr. Norwell suggested to Paul that the two of them enroll in an art class together.  Paul was delighted by this suggestion.  Mr. Norwell called me after their first class and told me how wonderful it was to observe Paul’s joy as they were drawing together.  He continued, “I think I can even get use to doing some of this art stuff.”  He had indeed reinforced a goodness-of-fit approach with his son that would have a lifelong impact.

I thought of George and Paul and their parents when I read a recent article posted on Insider.com written by Randi Mazzella with the intriguing title “Tom Brady’s son doesn’t like sports, and every parent can learn from how the quarterback has reacted.”  As many of my readers know I am an avid Boston/New England sports fan.  Even outside New England most regard Brady as the GOAT (Greatest of All Time) quarterback.  And his son doesn’t like sports!

Mazzella’s piece cited an interview that Brady did for Men’s Health authored by Ben Court.  The Court interview first focused on Brady’s workout routine and what some consider his unusual diet and then the topic switched to his role as a father.  Brady said that he had a lot in common with his 12-year-old son Jack, who loves sports.  However, his 9-year-old son Benjamin showed no interest in sports, “which caught the six-time Super Bowl winner by surprise.”

Brady observed, “It was hard for me.  I was like, ‘What do you mean?  He’s a boy; he should just do all these things that I do.”

Mazzella wrote, “But as Brady learned, just because a parent is a force in a particular area doesn’t mean they will share that passion with their offspring.  It may make it difficult to connect with or understand a child.  But it’s important for parents to make sure they don’t make a child feel insecure about their differences.”

Mazzella quoted Dr. Michele Borba, a well-known author and parenting expert.  “You never want your kid to think ‘I’m a disappointment to my parents because of who I am or because I am not like them.’”

Tom credited his wife Gisele for reminding him that Ben had different interests than Tom, conveying the message that parents could not force their interests and passions on their children.

And similar to Mr. Norwell’s insight about his son Paul, Tom discovered, “The reality is that Benny just likes different things.  And it’s great because now I just have to do what he wants to do.  When we do that, we have the best time.  He’s like ‘OMG, Dad, you’re so funny.’  He loves joking, and I joke back.”

“The best time” described by Brady is more likely to occur when parents make a concerted effort to achieve a goodness-of-fit with their children and display acceptance and unconditional love.  It can be very challenging for parents to modify the dreams and expectations they hold for their children.  However, the benefits of doing so, of having our children feel genuinely loved and our experiencing “the best time” with them, are well worth the effort.