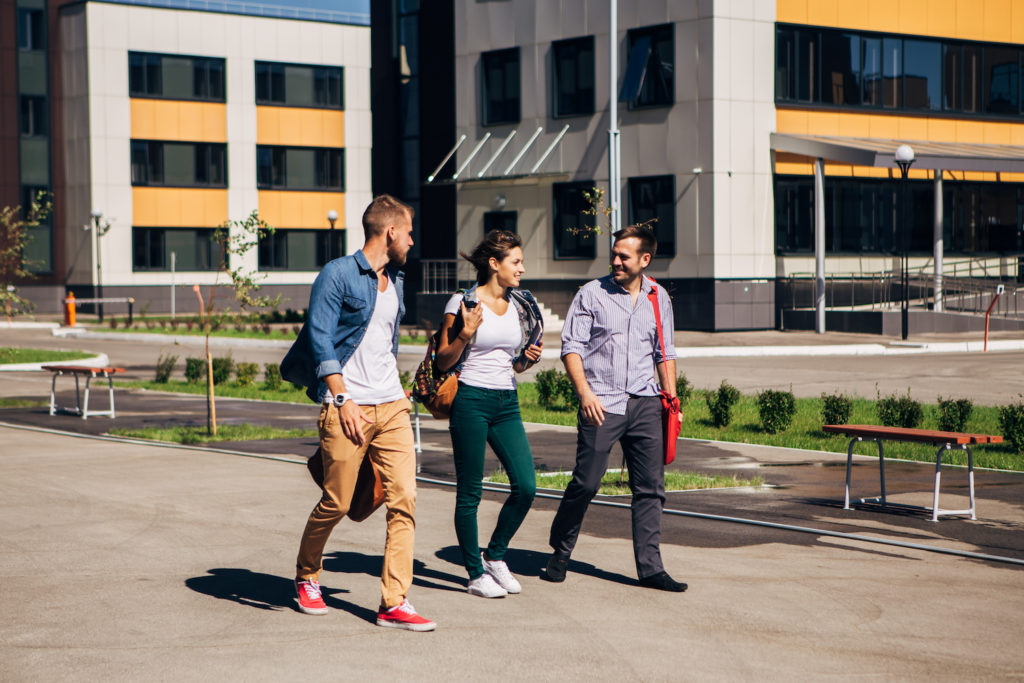 The following are two comments I heard at presentations I gave during the past month:

“I’ve been teaching high school for 15 years and the level of anxiety of the students seems to be growing at an exponential rate.  Just yesterday one of my students said that he’s really worried that if he didn’t get into his first-choice college, he would feel embarrassed and like a failure.”

This teacher then added, “I teach fourth grade.  It was a fourth grader who said this to me!”

As is evident from these comments, the level of anxiety among many students is very high.  While a significant source of the angst for high school students is focused on grades and college admissions (obviously, for younger students as well), it is important to consider that other significant issues also contribute on a daily basis to anxiety, including being bullied and/or a lack of acceptance by peers.

In some communities the presence of life-threatening situations is constantly in the forefront, casting a dark shadow that eclipses a sense of happiness and security.  As an example, I will never forget when I was working in the inner city of Boston and a middle school student asserted, “If you went to school here, you would also want to bring a gun to school.”  A probable catalyst for his comment was that just a few days earlier, a student was shot and killed a block from the school.

Obviously different students experience different degrees of worry in different situations.  From my conversation with the middle school student who spoke about the need for guns for protection I would guess that the thought of getting good grades was secondary to his worries about staying alive.  However, there are many students whose main source of inordinate pressure centers about their grades and the colleges to which they hope to be admitted.

A Main Source of Angst

In my March, 2018 article about “rejection” I highlighted the college admission process as one intense source of anxiety.  I emphasized that in hopefully moderating this anxiety, it was important to realize that many accomplished individuals did not attend what might be referred to as a “selective” college.  I cited Malcolm Gladwell’s book David and Goliath in which this renowned author expressed the view that for some students being admitted to and attending their top choice or reach school may not always be in their best interest.  As Gladwell argued, the school may turn out to represent a poor fit for them and they may have been happier and more successful attending a respected college but not one considered in the top tier.

I added that this opinion should not be interpreted to imply that the majority of students who attend a selective college would be less stressed and more successful if they were at a supposedly less elite school; rather this viewpoint captures the belief that attending a selective college is not for everyone regardless of their grade point average or scores on tests such as the SAT or ACT.

This perspective was reinforced in a recently released White Paper from Challenge Success, a nonprofit organization affiliated with the Stanford Graduate School of Education.  Challenge Success was founded by Drs. Madeline Levine and Denise Pope and Mr. Jim Lobdell.  As described on its website (www.challengesuccess.org), these founders, “utilizing the resources of a prominent advisory board of interdisciplinary experts, created a research-based organization that develops practical curriculum, conferences, and programs for parents, schools, and kids looking for a healthier and more effective path to success in the 21st century.”

A “Fit” rather than a “Mis-fit” with a College

The White Paper titled “A ‘Fit’ Over Rankings: Why College Engagement Matters More than Selectivity” provides a thoughtful and realistic portrait of the key ingredients for satisfaction and success in college. It is well beyond the scope of this column to go into great depth about the main conclusions of the White Paper, but the reader is encouraged to access and read the report in its entirety by going to the Challenge Success website.

My goal in writing this column is to summarize several of the key points of the White Paper.  The authors identified the following purpose of the report:

There is no question that the college admissions process can be stressful.  We hope that this paper prompts students and families to examine what college success means to them and to question common assumptions about college selectivity.  A good fit is a college where a student will be engaged—in class and out—by what the college has to offer.  With over 4,500 colleges in the United States, there are many schools from which to choose.  We encourage students and families to look beyond rankings in the college search process, and instead to seek a school where students can participate fully in academic, civic, and social life in order to thrive both during the college years and beyond.

The White Paper called into question the relevance of college rankings published by well-known organizations and the media, examining in detail the rankings used by the U.S. News and World Report.  In summarizing the variables included in determining a college’s rankings, the White Paper advanced the position that “traditional college rankings measure a set of factors that are weighted arbitrarily, drawn from data that are most easily quantifiable and comparable, sometimes poorly documented, and not always relevant to undergraduate education.  In short, rankings are problematic, and high school students would do well to broaden their gaze.”

The White Paper assessed several outcomes of a college education that are of special interest to students and their families, including: student learning, post-college job satisfaction, general well-being, and financial security.  In exploring the research related to student learning, the White Paper concluded, “There is no evidence that students’ learning will suffer for attending a less selective college, and they may well find a better fit in other ways.  In particular, students are best served by attending institutions where they are motivated to invest meaningful time in their studies.”

In examining job satisfaction and general feelings of well-being linked to the college attended, the White Paper cited the Gallup-Purdue survey, which has been administered since 2014 to graduates from a wide spectrum of colleges.  These comprehensive surveys went beyond income earned to measure how graduates felt about their jobs and careers and “found no relationship, in most cases, between the types, location, or selectivity of college and well-being after graduations.”  In presenting their findings, Gallup-Purdue contended that “what the students are doing in college and how they are experiencing it” may have a more significant impact on their lives than the selectivity of the institution.  These findings parallel the results from other research studies.

The White Paper reported, “There is some evidence to suggest that institutional selectivity is associated with long-term financial outcomes.”  One study found that graduates of so-called “high quality” colleges have salaries approximately 6 to 8% higher than colleges that admit almost any student and that percentage rises by about 10% within a decade of graduation.

“Is It the College, or Is It the Student?”

However, in analyzing these salary differences the White Paper raised the question, “Is it the College, or is it the Student?”  They observed, “Because students aren’t randomly assigned to colleges, it’s difficult to determine whether the benefits of attending a more selective college result from that college, or rather reflect the kinds of students who attend those colleges in the first place.  Is the value added by the college or by the individual student?”  In reflecting on this question, I know that there have been surveys that demonstrate the large proportion of students from affluent as compared with lower socioeconomic backgrounds at Harvard College.  I would guess the same is true for other Ivy League and so-called higher tier colleges.

More refined research is taking place to answer the intriguing question “Is the financial value added by the College or the Student?”  In one study students were matched on socioeconomic level, with some students attending schools judged to be more selective, while others turned down offers of admission from these schools and decided to attend less selective alternatives for a variety of different reasons, including financial worries or wanting to remain closer to home.  The findings of this study were very revealing.  The researchers concluded, “Selectivity had no effect on long-term earnings.  The same students who were admitted into the selective schools but who chose to attend less selective schools did just as well financially later on in life.”

The White Paper cautioned that these research findings cannot be generalized beyond the selective schools in the study, but added, “We should consider the possibility that even in studies that find differences in economic outcomes between selective and non-selective colleges, these differences are driven by individual students, not by the quality of the student body as a whole or the institutions themselves.”

The following conclusion was reached: “Research shows no relationship between selectivity and learning, job satisfaction, or general well-being.  There may be, at best, modest financial benefits to be gained from attending more selective colleges, but the research is mixed and much more nuanced when it comes to the long-term financial benefits of attending a more selective school, once student characteristics are taken into account.”

In discussing the influence that the college attended has on future employers, the White Paper expressed, “While some employers might check the name on your college transcript, most care far more about your track record in the field, basic communication and problem-solving skills, and the attitude and work ethic you bring to the table.”  I should note that this observation has been a position I have emphasized for years in my work and presentations.

I realize that many reading this column may question some of the conclusions reached in the White Paper.  Since this article is my summary of the report, as I recommended earlier I would urge everyone to read the entire report to gain a more complete picture of the research findings.

Factors that Have an Impact on Student Outcomes

After reviewing variables that do not seem as influenced by the college one attends as may have been predicted, the White Paper asked what factors have been found to have an impact on such student outcomes as learning, well-being, and financial success.  The answer: “The students who benefit the most from college are those who are most engaged in their academics and campus communities, taking advantage of the opportunities and resources their particular institution provides.  Engagement (my emphasis) is the key.”

I have written about the power of engagement in the learning process.  The White Paper identified variables that nurture engagement such as: taking a course with a professor who makes learning exciting; working with professors who care about students personally; having a mentor who encourages students to pursue potential goals; participating in an internship that applies classroom learning; and becoming active in extracurricular activities.  “A good ‘fit’ is a college where a student will be engaged—in class and out—by what the college has to offer.”

As students and families are beset with anxiety about the college admission process, as they subscribe to the belief that the most selective colleges, which are open to only a small percentage of applicants, are the path to happiness and financial success, they would be wise to consider the research and wisdom conveyed in this White Paper released by Challenge Success and to reflect on the “fit” or “mis-fit” between a student and college—and to carefully consider in what setting the student will be most engaged.